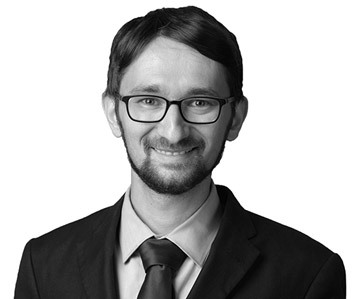 Leonid Grinberg is an associate who litigates complex matters for plaintiffs and defendants from the filing of a complaint through appeal.  He has litigated at every level of the judicial system, in state and federal courts, from trial courts to the U.S. Supreme Court.  His practice focuses on general commercial litigation as well as appellate litigation and white collar matters.

Mr. Grinberg is a skilled researcher, writer, and advocate.  He contributes to every phase of the case – performing in-depth legal and factual research, developing case strategy, drafting key motions, taking and defending depositions, and preparing diligently for argument.

Before joining MoloLamken, Mr. Grinberg clerked for the Honorable Frederic Block of the United States District Court for the Eastern District of New York.  He relies on that experience to help focus cases on the issues that judges actually care about, which helps to streamline litigation and avoid tangential disputes.

Prior to law school, Mr. Grinberg worked as a software engineer for a major media company.  He holds an S.B. in Computer Science and Engineering from the Massachusetts of Technology.  His technical expertise complements his legal skills and frequently allows him to bring a fresh perspective to cases involving complex technology.