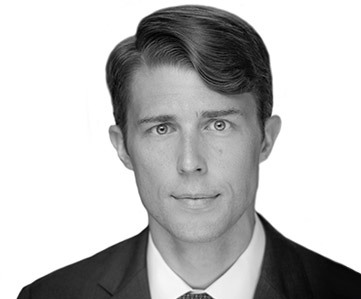 Caleb Hayes-Deats is an accomplished litigator who has repeatedly secured advantageous outcomes for clients. He represents companies and individuals in high-stakes commercial disputes and government investigations. He has been recognized as a “Rising Star” in D.C. by the National Law Journal and in New York by Super Lawyers. His practice spans all levels of the judicial system and many different industries. He has tried cases and argued motions in state and federal courts. He has also briefed and argued appeals before federal courts of appeals.

Mr. Hayes-Deats represents both plaintiffs and defendants in his civil practice, advising them on some of the most complex and pressing issues facing businesses today. He has recovered millions on behalf of plaintiffs, both at trial and through settlement. He has likewise helped defendants navigate the legal and public relations risks that accompany civil suits.

Mr. Hayes-Deats also represents individuals in connection with high-profile government investigations. His representations have covered a wide variety of subjects, ranging from impeachment proceedings before Congress to criminal investigations by the Department of Justice.

Before joining MoloLamken, Mr. Hayes-Deats was an Assistant United States Attorney in the Civil Division of the U.S. Attorney’s Office for the Southern District of New York. As an AUSA, Mr. Hayes-Deats had wins valued at nearly $2 billion in high-profile fraud, tax, and Bank Secrecy Act cases. He secured those wins against some of the nation’s largest financial institutions, such as Wells Fargo, AIG, and US Bank. In 2016, he was part of a team that, after a five-week mortgage-fraud trial, won the 18th largest jury verdict in the country, according to the National Law Journal’s Top 100 Verdicts of 2016. Mr. Hayes-Deats also helped settle high-stakes cases, winning the Department of Justice’s John Marshall Award for Alternative Dispute Resolution.

Mr. Hayes-Deats has taught as a Lecturer in Law at Columbia Law School.