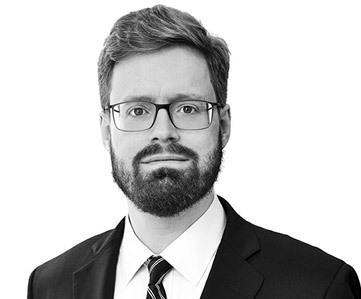 Justin Ellis litigates high-stakes business disputes from the filing of a complaint through appeal. He tries cases and argues appeals in federal and state courts, often on complex commercial and financial subjects. He has litigated in every level of the judicial system from state trial courts to the Supreme Court of the United States. Mr. Ellis has particular experience in bankruptcy, distressed debt, and structured finance litigation, with clients including corporations, hedge funds and asset managers, indenture trustees, family offices, and high net worth individuals.

MoloLamken routinely handles cases with dozens of witnesses, massive document productions, and cutting-edge legal questions.  Clients turn to Justin to push these cases through to resolution.  And they depend on him to help distill technical, sprawling records into a clear – and compelling – story for trial.  Justin regularly works with a wide range of experts, graphics and jury consultants, and lawyers from multiple firms to create a unified and efficient fighting force for the client. Together with the MoloLamken team, he has helped recover over $2 billion in settlements and judgments for clients over the last five years.

Legal 500 describes Mr. Ellis as having “an unsurpassed encyclopedic knowledge of the law and all of its intricacies.”   Chambers & Partners describes him as “incredibly knowledgeable and skilled and understand[ing] the issues, dynamics, complex contracts and legal concerns involved in cases.”   Lawdragon has named him as one of the country's top litigators and plaintiff's financial litigators, as well as one of the top bankruptcy and restructuring attorneys in the United States.  He has also been named repeatedly as a “Rising Star” by Super Lawyers and is on Benchmark Litigation’s “40 and Under Hot List.”

Prior to joining MoloLamken, Mr. Ellis was an associate in the New York office of Sullivan & Cromwell LLP. He also served as a law clerk to the Honorable Frank H. Easterbrook, Chief Judge of the United States Court of Appeals for the Seventh Circuit and as a research assistant to the Honorable Richard A. Posner and Professor William Landes.

The University of Chicago Committee on International Relations, A.M.

The University of Chicago, A.B.