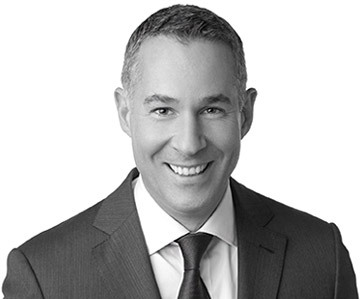 Justin Shur, a former Justice Department prosecutor, is a partner in MoloLamken’s Washington, D.C. and New York offices. With more than two decades of first-chair trial experience, Mr. Shur has earned a national reputation for successfully representing clients in some of the most prominent white collar criminal matters and high-stakes business disputes. His clients have included Fortune 500 companies and other major businesses and organizations around the world and across a broad range of industries. Mr. Shur has also represented individuals in a variety of different fields, including CEOs and other corporate executives, a U.S. Cabinet Secretary, an Ambassador to the United Nations, a real estate mogul, an NFL team physician, a tech entrepreneur, a fashion designer, and an Academy Award-winning actor.

Mr. Shur specializes in representing clients in complex and sensitive investigations by prosecutors, regulatory agencies, and congressional committees, often under intense media scrutiny. His representations have included some of the most high-profile matters in recent years and have involved nearly every issue that has been the focus of government enforcement, including alleged violations of federal securities laws, corporate, tax, and accounting fraud, healthcare fraud, Foreign Corrupt Practices Act violations, antitrust violations, False Claims Act violations, money laundering, campaign finance violations, and public corruption.

Mr. Shur has successfully resolved a number of significant white collar matters confidentially, persuading authorities not to bring charges. And when cases are brought, he is equally effective in defending clients. An experienced courtroom advocate, Mr. Shur has tried dozens of cases before juries and judges across the country. Drawing on his time as a federal prosecutor, Mr. Shur is also regularly called upon to conduct internal investigations, and advise companies and their boards on risk mitigation and effective compliance measures.

In his civil practice, Mr. Shur has represented both plaintiffs and defendants in multi-billion dollar disputes involving many of the most pressing issues facing businesses today. He has litigated and tried a wide array of complex commercial cases in nearly every setting, from federal and state courts to various arbitration forums. Mr. Shur has also helped clients avoid the cost and risks of courtroom battles by achieving highly favorable pre-suit and pre-trial outcomes.

Prior to joining MoloLamken, Mr. Shur was a highly regarded prosecutor. Mr. Shur served in the Criminal Division of the Justice Department, where he oversaw some of the nation’s most significant fraud and corruption investigations and prosecutions as Deputy Chief of the Public Integrity Section. In that role, he handled a number of high-profile matters, including the investigation into the activities of lobbyist Jack Abramoff—resulting in the conviction of more than 20 individuals including a U.S. Congressman, and for which Mr. Shur received the Attorney General’s Award for Distinguished Service. Mr. Shur was also appointed a Special Assistant U.S. Attorney in the Eastern District of Virginia to prosecute one of DOJ’s largest campaign finance fraud cases. Mr. Shur began his career as an Assistant District Attorney in Manhattan under the legendary Robert Morgenthau.

Mr. Shur was recently profiled in Lawdragon’s Lawyer Limelight and has been repeatedly recognized as one of the country’s leading trial and white collar defense lawyers by numerous publications, including Chambers USA, Best Lawyers in America, Super Lawyers, The Legal 500, The American Lawyer, The National Law Journal and Lawdragon's 500 Leading Litigators in America. Mr. Shur also received numerous awards during his tenure as a prosecutor, including the Attorney General’s Award for Distinguished Service for his work as trial counsel in the prosecution of a senior White House official for obstruction of justice.

American Board of Criminal Lawyers, Fellow

Council for Court Excellence, Board Member

The Bar Association of the District of Columbia, Member

2020 Magistrate Judge Merit Selection Panel for the U.S. District Court for the District of Columbia, Member